Oh Dublin. You lovely, gorgeous, and fun city. We visited Dublin three times this year to see They Might Be Giants and Flight of the Conchords and fell in love with everything Dublin has to offer. From the great whiskey, to the boxty restaurants, and the amazing views, the city is a must visit for me. 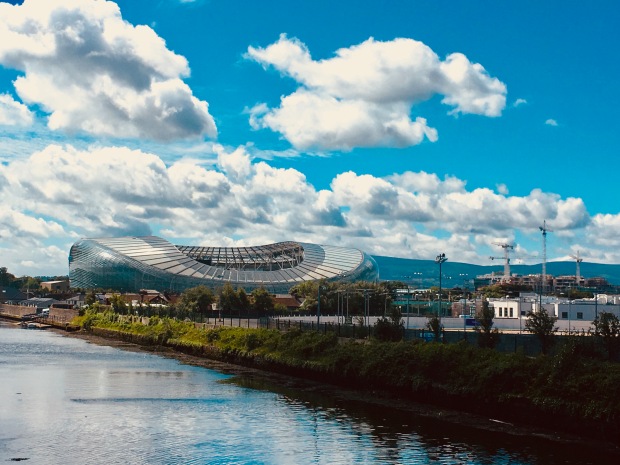 This is part 2 of our Dublin adventures and I’ll be highlighting our stops in the Southern part of the City Center as well as Dublin Bay. 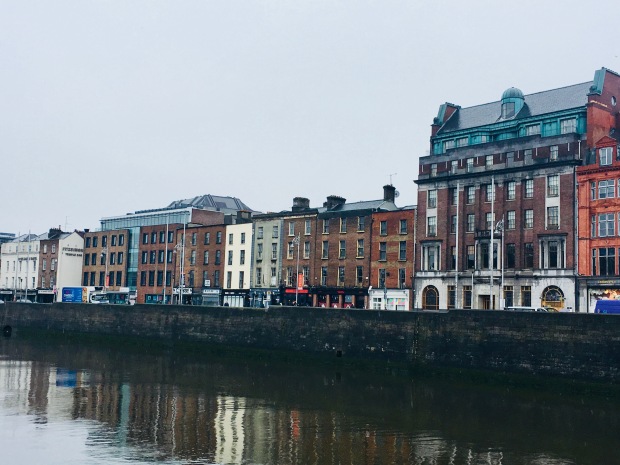 View of the River Liffey from the Ha’Penny Bridge 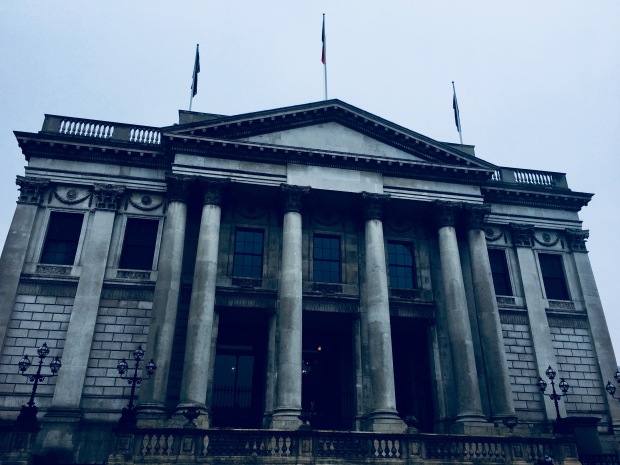 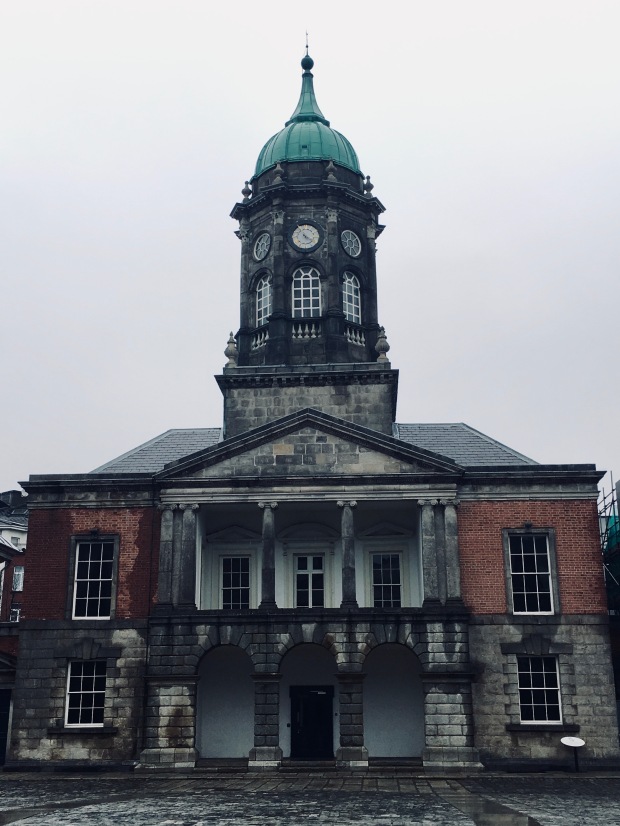 Dublin Castle, the location of the inauguration of the first President of Ireland in 1922.

Chris: “I need to charge my Nintendo Switch.” 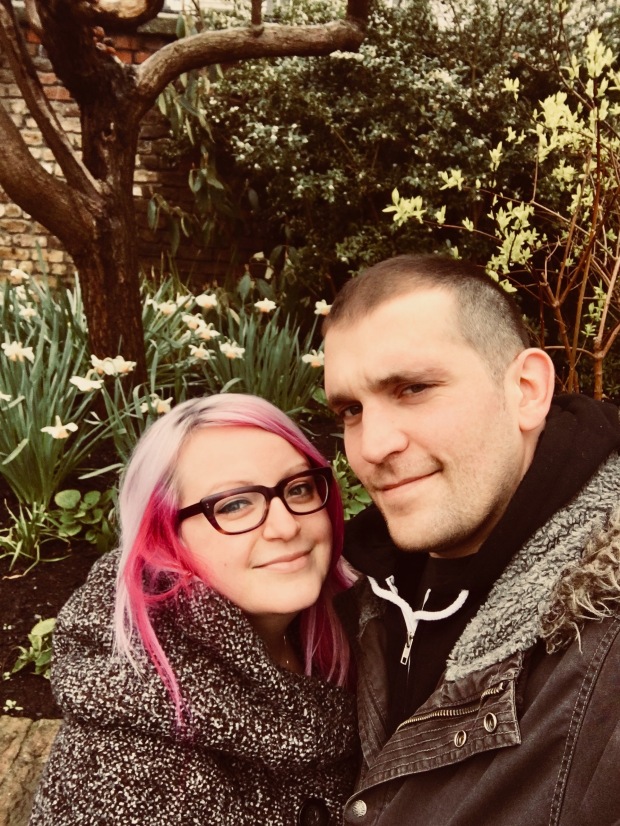 The gardens at the Castle were absolutely beautiful. 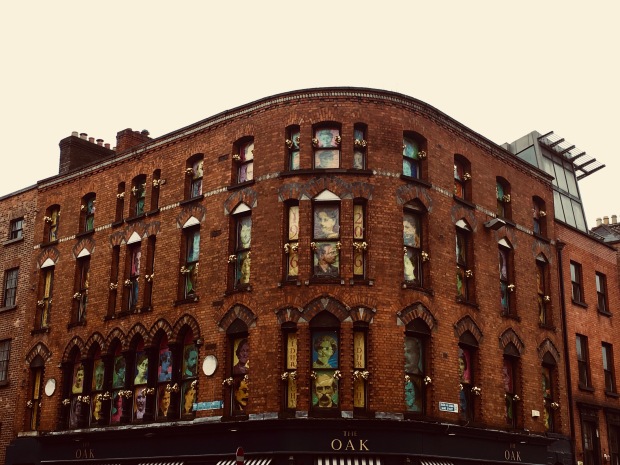 A building I loved.

View from the North Wall. 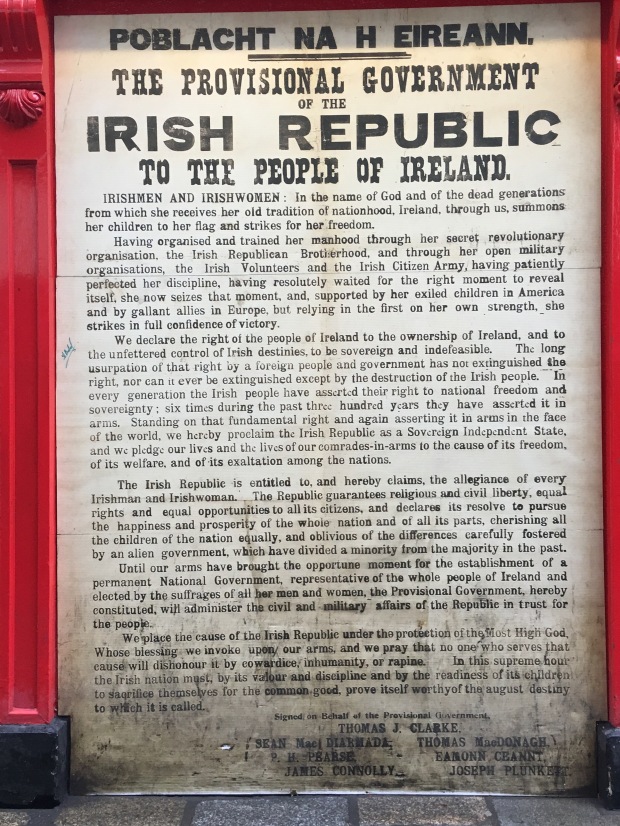 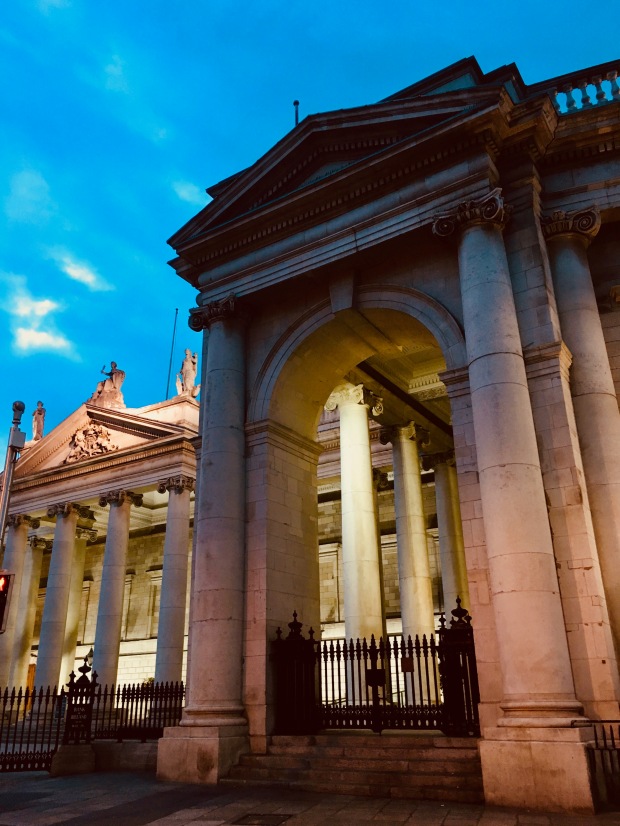 View from the North Wall 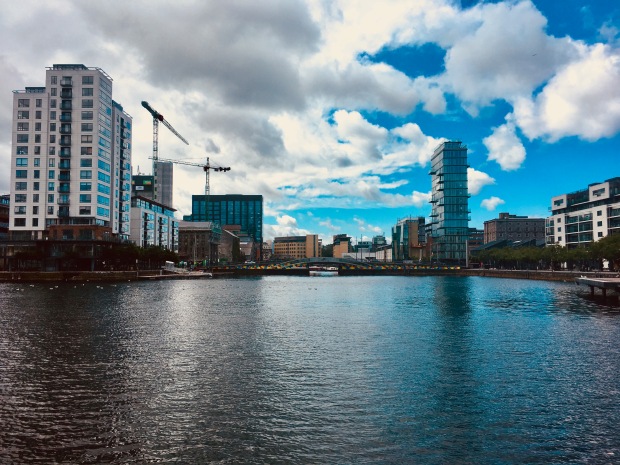 View from the canal

The tide was out and I joked about bringing Porkchop, Ike, and Arya here. Ike absolutely hated the beach but I thought he’d enjoy trotting around while avoiding the water. 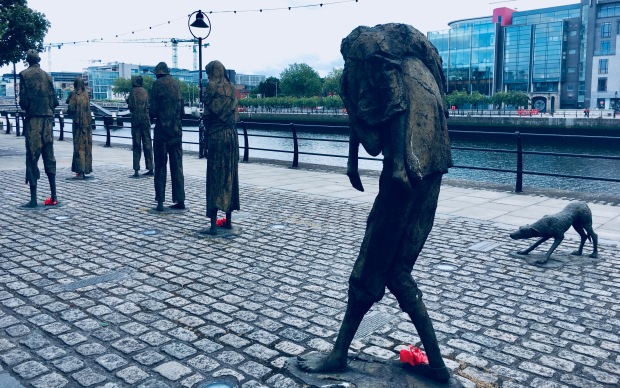 The Famine Statues commemorate the Great Famine of the mid 1800s when over one million people died and over a million Irish emigrated from Ireland. The Famine was caused by a potato disease that decimated the potato crop in Ireland. This was further exasperated by political, social, and economic factors that in turn saw the population of the country drop by 25%.

Via the Irish Times. Hodges & Figgis is an amazing bookstore that I highly recommend.

3FE is an absolutely amazing coffee and brunch spot located near Grand Canal Street. They specialize in coffee and even host classes and subscriptions for customers hoping to bolster their coffee game. In addition to their great coffee, 3FE also has an ever-evolving brunch menu which featured a giant Scottish egg and broccolini when we visited. 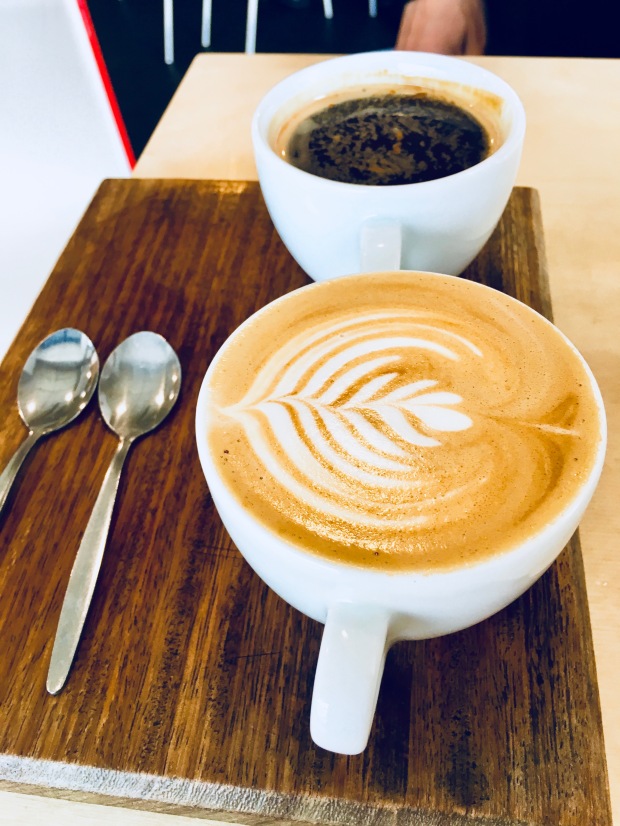 Just on the banks of the Grand Canal, HerbStreet is a solid brunch restaurant with Irish menu options and desserts. Bundled in blankets even under the sunshine, we ordered breakfast and enjoyed the beautiful location. Our server was a little shocked that I ordered both sweet (banana pancakes) and savory (forest mushrooms) but I couldn’t help but order #ALLTHETHINGS 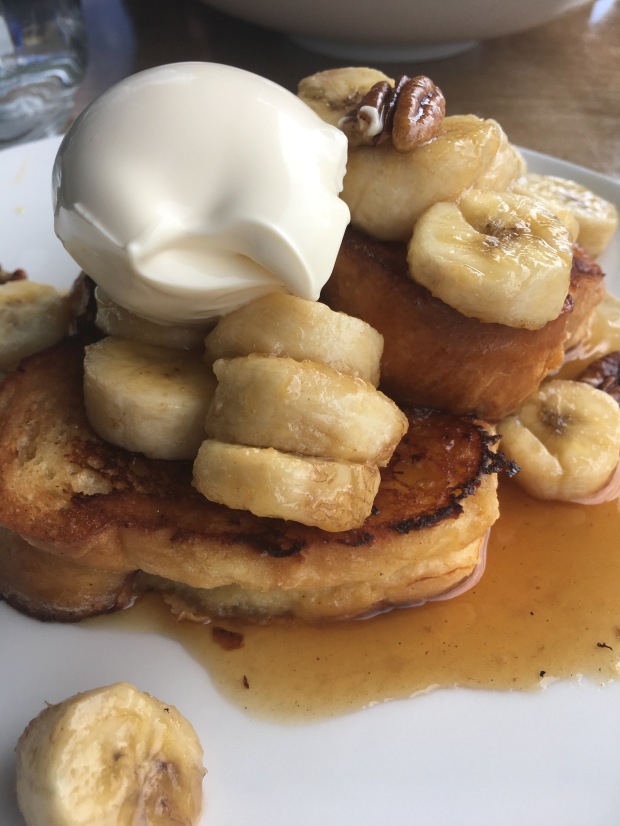 The Farm is located right across from my favorite bookstore (again, you see a theme here and also why my love for Dublin is so great) and boats a small, but awesome menu. Even though I’m generally meh about salads, I had to order this “everything and the kitchen sink” salad that was probably one of the best meals I’ve had in Europe. Chris had the burger and loved it. 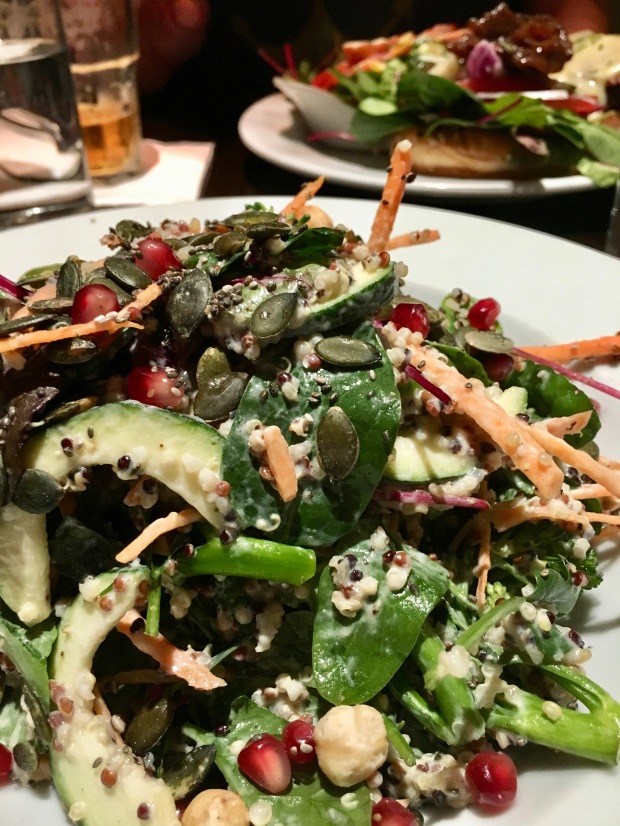 The Porterhouse (in Temple Bar):

The Porterhouse in the Temple Bar was Dublin’s first craft beer bar and opened in 1996. They have a ton of taps and a solid menu including burgers and nachos. With two different levels and multiple bars, this is a great stop if you’re exploring the City Center. 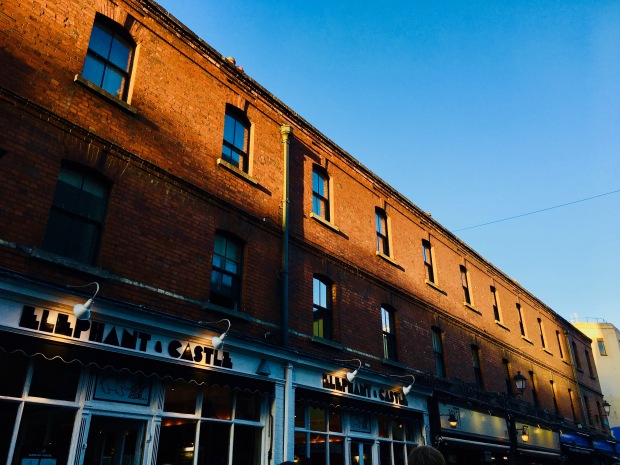 Located right next to each other! 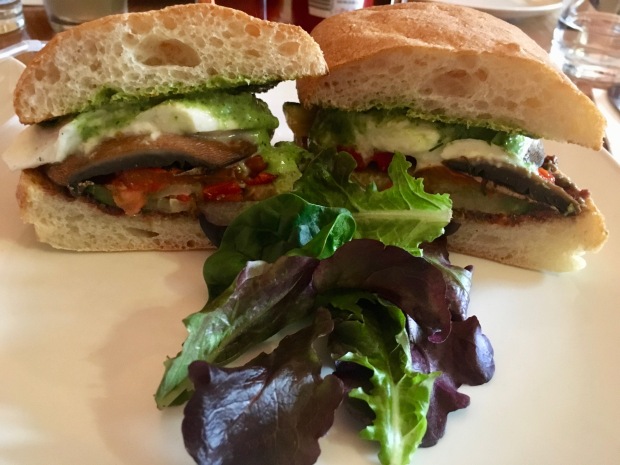 Located in Dublin’s Temple Bar region, we had lunch at Elephant & Castle on a super rainy Irish afternoon and loved it. Known for their wings, Chris and I surprisingly ordered soup and sandwiches, which were great. The cafe is small but lovely if you’re in the area (get their homemade soup!)

For Gallagher’s Boxy House, their motto is “the humble spud made beautiful” and wow do they deliver. Not only do they offer boxty dishes as pancakes and pasta, but they also deep fry their boxty dough as frites (all the hearts for eyes emojis)! I ordered the fall special which featured sweet potatoes, kale, and sage. AMAZING. 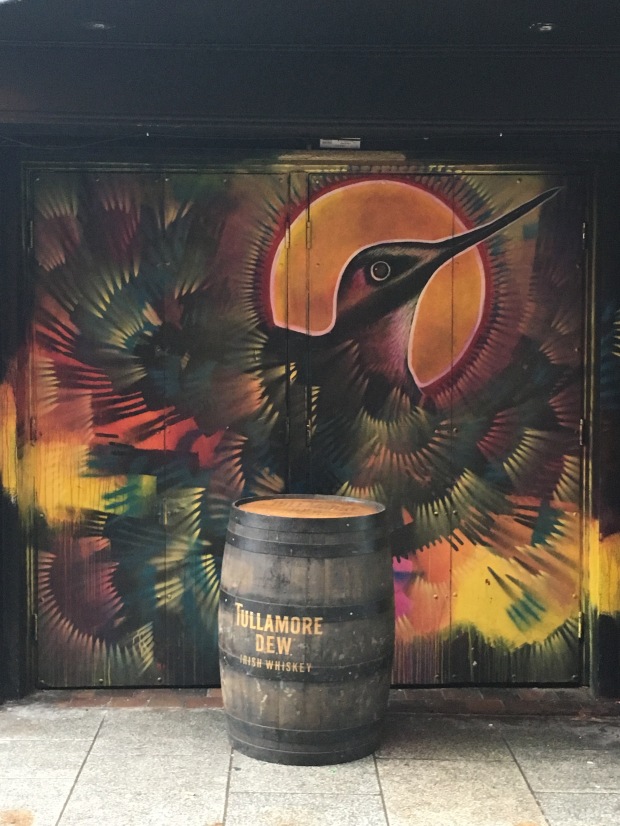