It has been a busy few travel months as we transition from winter to spring (finally). From Bratislava (chilly), to Vienna (freezing), and Prague (Do I need a jacket? Shorts? What’s happening?) we’ve found some new favorite spots and seen a few of our most-loved bands in familiar cities.

Located next to the Church of St. Elisabeth, Deli Grösling is a great spot for a sandwich and baked treats. We ordered egg and pepper sandwiches along with a couple of amazing Slovakian desserts. Bratislavské Rožky and Laskonky meringue cookies are both a must-try and perfect for a short bus ride home.

Urban House is one of my favorite spots for breakfast (clearly). We splurged on enough food to feed a family of five, as well as ordered their take on a Bloody Mary. In the red mug with ice, this was one of my absolutely favorite versions of this classic breakfast cocktail. So good in fact that we cornered the bartender to pressure him into hearing our compliments on his superior mixing skills.

Žil Verne was voted one of the best craft beer bars in Bratislava in 2016. One of my favorites, they have a list of local and non-local brews that changes daily, along with an extremely local menu (the sheep cheese and pickled veg plate is 🙌🏼). 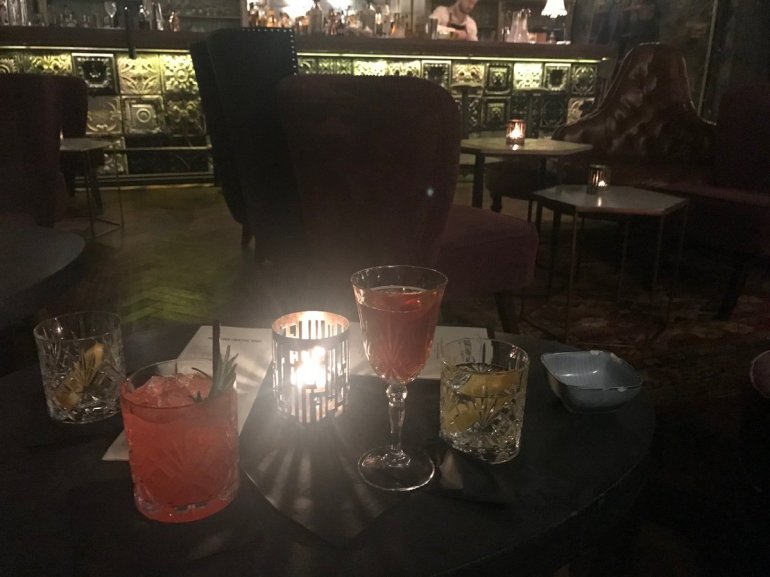 A secret speakeasy located above Urban Bistro, Michalska Cocktail Room is our favorite cocktail bar in Bratislava. When I mention that it’s a “secret”, I’m not overexaggerating; the entrance to the bar looks like a wardrobe and opening the door feels like you’re wandering into Narnia. The drink list is genuine, original, and while a bit on the expensive side, totally worth it. While we were there we secretly watched–maybe not so secretly as there were a lot of cheering–Judge Aquilina deliver her message to Larry Nassar: “I’ve just signed your death warrant.”

Chris and I visited Vienna to see one of our favorite bands, Pokey Lafarge. They played at the Chelsea, which is a small and fun venue, but made it virtually impossible for me to take any pictures that look remotely decent. It was absolutely freezing–like too cold for my multi-layer Eastern Europe coat and socks–but luckily the sun was out most of the time.

Bonus: They played one of our favorite songs, Rotterdam.

Near the Chelsea, we stopped at Gürel Bräu for dinner before the show. They have a cozy atmosphere and great menu including this spinach spaetzle. 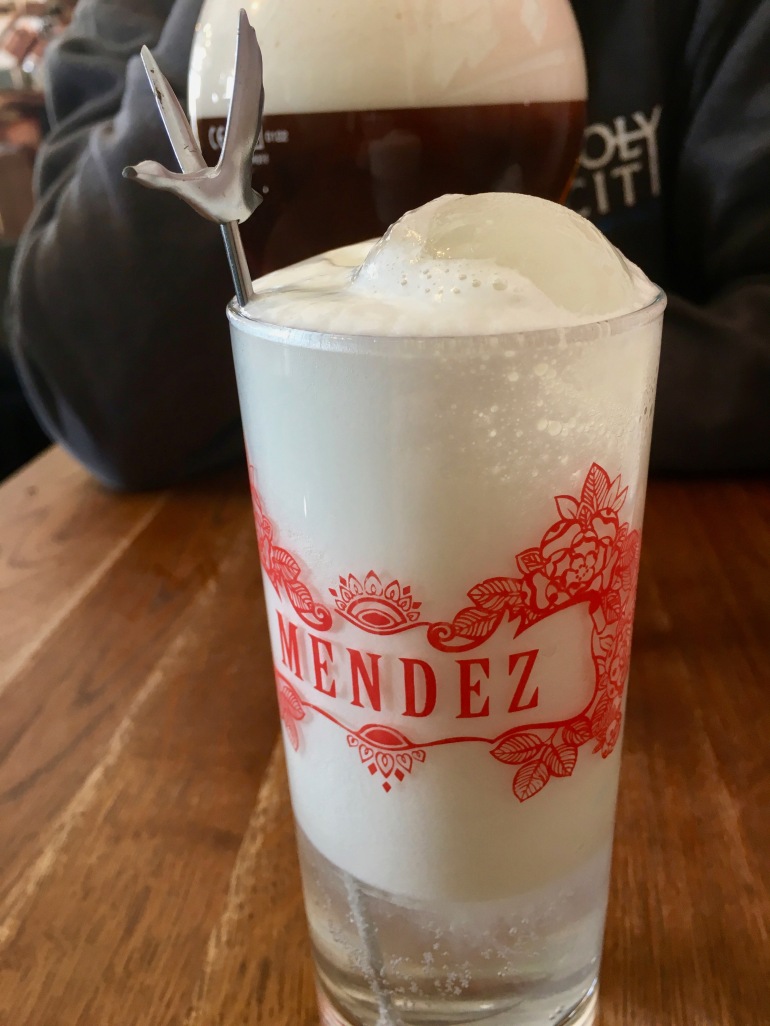 I can not say enough great things about Cafe Mendez. They have an awesome food and drink menu and the service was great! We ordered the nachos and I chose the “Floral and Wow” cocktail, which was 👌🏻👌🏻. We shared a plate of nachos and their menu has a variety of quesadilla and burger options too.

After watching the Miracurl on Ice, Chris and I celebrated the US curling team’s first ever gold medal by visiting 7 Stern Bräu. The brewery has a traditional atmosphere and a nice variety of both light and dark beers, with a few specials on tap as well. I really wanted to try the 7 Stern Chilli, but stuck with the more early-afternoon friendly Helles. 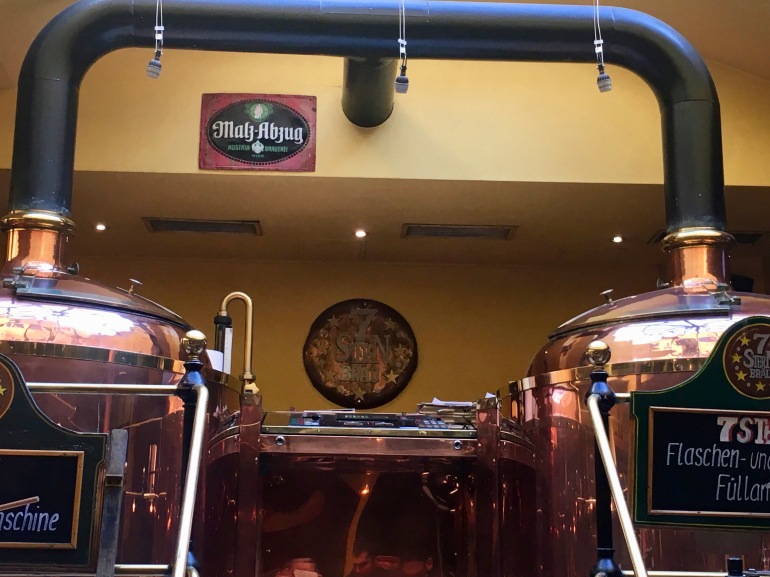 1516 Brewing Company brewed the best beer we had while in Vienna. Their IPA, named after Nick Foles’ uhhh talent, was our favorite, but the Victory Hop Devil (also Super Bowl themed) was also really great too. I’m just sad that we didn’t have enough of an appetite to eat because their menu was amazing.

If The Great Gatsby and Tron had a baby, it would look like Blue Mustard. The bar is gorgeous and the drink menu featured an amazing version of a Bloody Mary (see below) and more importantly a drink named after the GOAT that is Keanu Reeves.

They also feature a late night food truck for after hours food, making this one of my favorite new spots in Vienna.  The prices are a little high, but definitely worth a stop if you’re looking for a fun speakeasy in Austria’s capital. 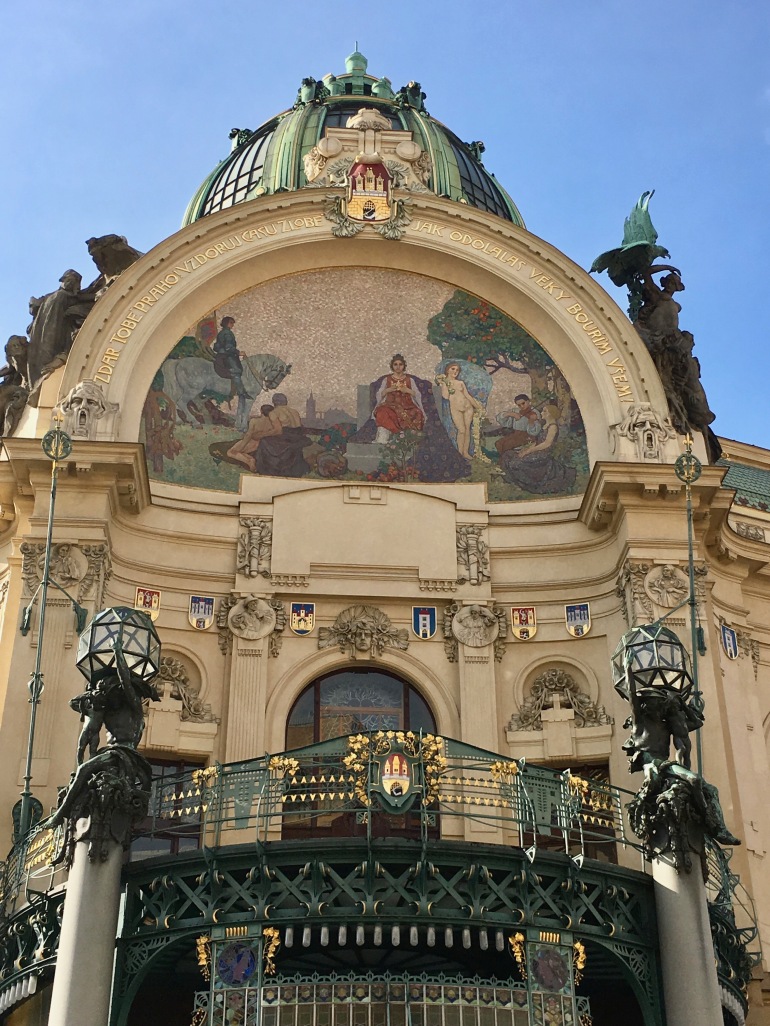 We visited Prague to see Franz Ferdinand and they had an AMAZING show.

Not only was seeing them live a dream come true for not only the Ashlyn of my youth, but also current old-man-Ashlyn is STILL super freaking impressed by the band’s energy and talent. They played their hearts out and it was so fun after a week of bad news to just dance around like a crazy person. If you have the chance to see them play I’d 10000% recommend it.

We brought Ike with us to Prague and I wanted to treat him to extra cookies since he was without his brother and sister (although Ike was enjoying the #onlychildlife haha). Of course nearly every place in Prague welcomes pups, but with the different changes in elevation throughout the city, bringing home cookies for old-man-Ike was the safest option for his little legs (or maybe we should invest in a dog backpack). 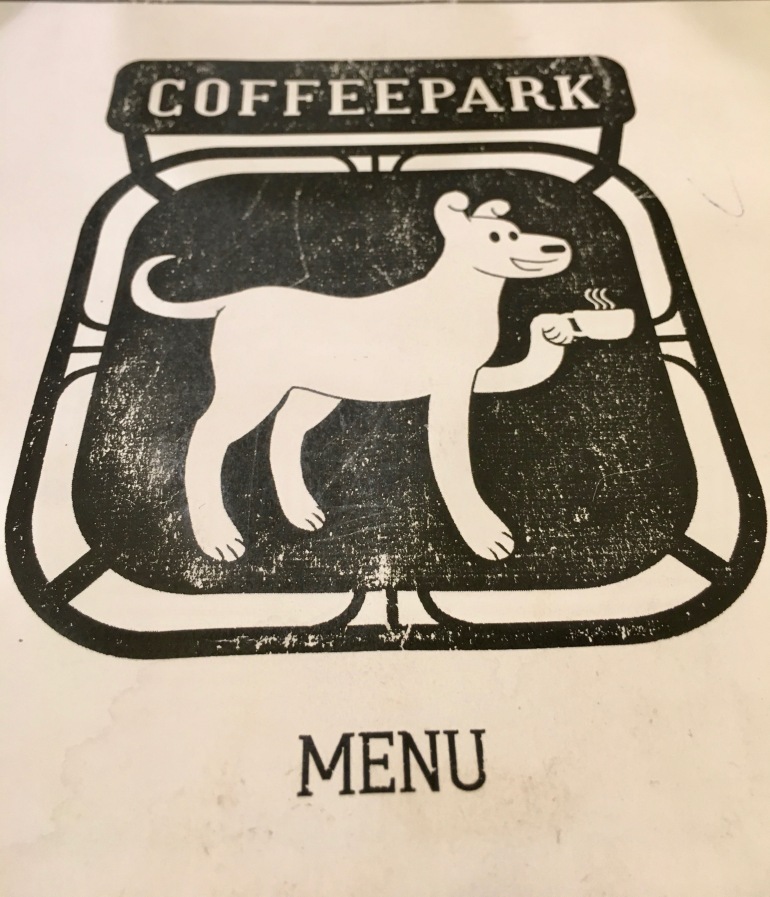 Coffeepark is such a cute stop for a light breakfast/lunch and they even include options for your dog! I was really regretting not getting that puppy backpack for Ikers, but he definitely enjoyed all the treats we brought back for him.

Bakeshop is a great place to stop for a quick snack, breakfast, and/or coffee. They have a huge selection (although they do run out of bagels quickly on the weekend, so get up and there if you’re feeling a rye+cream cheese) of items including to-go boxes of sides and full meals. We bought a few sandwiches and snacks for the drive home.

BeerGeek Bar & Pivotéka is one of our favorite new craft beer stops in the city. Located right on the line between Prague 2 and 3, it is definitely worth the short walk from Old Town. The have 32 taps along with a huge selection of bottled beers from all across Eastern and Western Europe, as well as a couple of options from the US.

One thought on “Early 2018 Wanderings: Bratislava, Vienna, and Prague”